3 Irrigation Sensors You Should Already Be Installing 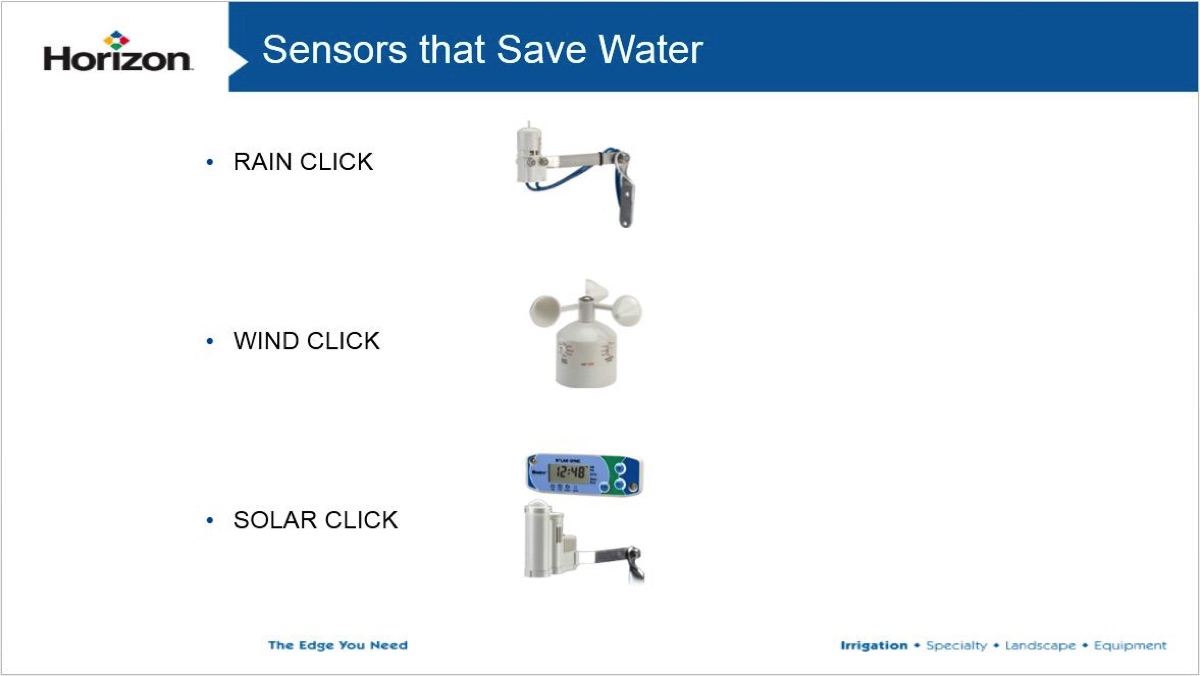 In Part 6 of our Drought Solutions video series, you'll learn the ins and outs of using each sensor, how to save water with seasonal adjustments and daily ET notifications, and where to install your sensor so it operates correctly.

You don't wanna be that guy that's irrigating in the rain. Every single system should have at least a rain shutoff.

They'll react in fog also. It's got a small enough setting on there that if you have a super, super heavy fog day, it won't irrigate. The ET is such that you don't need it that day.

How about wind? Pretty windy around here. We get a good onshore breeze.

How many times are you on a site and we're trying to irrigate that way, and that gear drive
rotor or that spray head is pushing as hard as it can that way, and all the water is over here
in the parking lot? Because of the wind.

What if we set up just a little wind sensor? All it does is just like this, it breaks the common wire. Its got highs and lows.

So let's say we got a 15 minute run time. For 15 minutes of that run time that we have on there, 5 minutes it's too windy to put water on that turf plot.

It shuts off the system. It doesn't shut off the controller. The controller still thinks its
running. It just breaks the common wire and it's running.

So now the system is not irrigating. The clock is still running for 5 minutes. You get that gust of wind through. The wind sensor says, "Oh, OK, it's quiet enough now." And it kicks on your system for the additional 10.

Yeah, we did miss 5 minutes of watering that day, but we didn't put it on the parking lot over
here and let it run down the drain as waste.

Question from Audience: Does it record that so you know?

No it does not. But yes it will, if you get a weather station. These are just the littleplug-ins. This is that low hanging fruit that you can solve a quick problem.

That's where as a weekly turf manager, keep an eye on what our turf is doing. Man it's been really, really windy. We may have to change our run times. We can't run anymore at that 6pm window. We gotta put that cycle on. There's no buildings in the way. This thing is out and exposed in front of everybody.

We gotta get that one closer to midnight when the wind is really calmed down. So you may have to adjust that run time from when it is, to a calmer time of the day.

This is a product that Hunter has out. It reads solar radiation, it reads rain and it reads humidity. And then it ties that in with the controls and it ties it in with historical data.

How to Save Water with Seasonal Adjustments and Daily ET Notifications

You set your controller at 100% in July, and then it seasonally adjusts down or up based on
where you're using it.

So then as a homeowner, oh cool, my seasonal adjust should be 58%. 58% seasonal adjust. It adjusts all the run times on the controller. That's how they're doing it to make it easier.

So today we used 0.25" of water for high quality turf. And if you don't care because it's that
retention basin out in the back. To keep it alive, it's gonna be a 0.18". High quality, low
quality turf.

So we've got those daily ETs coming in. You just plug it in and away you go. Do the little math calculator.

Installing Your Sensor in the Right Location

"Put it right by the controller."

Alright, sure enough. Controller right there. Beautiful install. Little cable, censor right there. Problem is eaves of the house.

It's like dude, really? Do I really have to come out here and say it's gotta get to the rain.

Most of these devices are wireless now. You don't even have to have a wire. You just put the device out there where it can get to the rain.

Same with this one. This one reads solar radiation. Had a guy, the system didn't shut off for two weeks.

"Man, my customer is really, really mad. His water bill is through the roof and I found out
the controller still hasn't shut off. It's been running for two weeks."

I go, "How long has it been since you've been there?"

"Why are you calling me two weeks later?"

He put the sensor on the southwest facing wall of a stucco wall in Phoenix, Arizona. That
sensor had to be 160 degrees. Melted off the side of the house. There's no way it's gonna catch up to the water run times. It's saying more water, more water, more water. The thing will never catch up.

These are the low hanging fruit things that guys go, "Oh man, that guy wants a rain sensor? What a pain in the butt!"

No! That's another $150-$200 you can add to a ticket and install it. They don't know anything
about it. You know everything about it. Take advantage of it. Go out there. Install it for them. They'll think you're a hero.

But let's install them correctly. And our guys can make sure that you're getting it installed correctly if there's any questions.