The Long-Term Benefits Of Organic Fertilizers

In Part 14 of our Drought Solutions video series, you’ll learn how organic fertilizers are able to boost the microbial activity and bio-reserves in your soil's profile.

We've got a study going on in Phoenix right now on bermudagrass, where for the past 6 years, we've done organic inputs. It got mowed with a mulching mower. So we're mulching that back in and it got organic inputs for a full 6 years and then just standard irrigation.

In the past 2 years, the only thing they stopped was the organic inputs. For 2 years now, that turf plot has been mowed, mulched, mulch mowed and irrigated and that turf plot still looks phenomenal.

I gave it 6 months. Ah yeah, 6 months you'll need more nutrients. What's going on now is that the microbial activity is taking that mulch mowing and starting that whole regeneration process. So what happens with organics vs. synthetics is as time goes on, your soil gets better and better and it starts working for you so now you have to have less inputs and less inputs.

The Key Benefits of Organic Fertilizer

Organic benefits. Obviously, it provides energy for the microbial buildup. We've talked about that. It increases the organic content to enhance the soil structure, water and nutrient retention.

It's holding that water. Now the soil is acting as your reservoir and you've got a much, much longer cycle in between your irrigations and less water. You saved it. Less nutrient input, saving money. 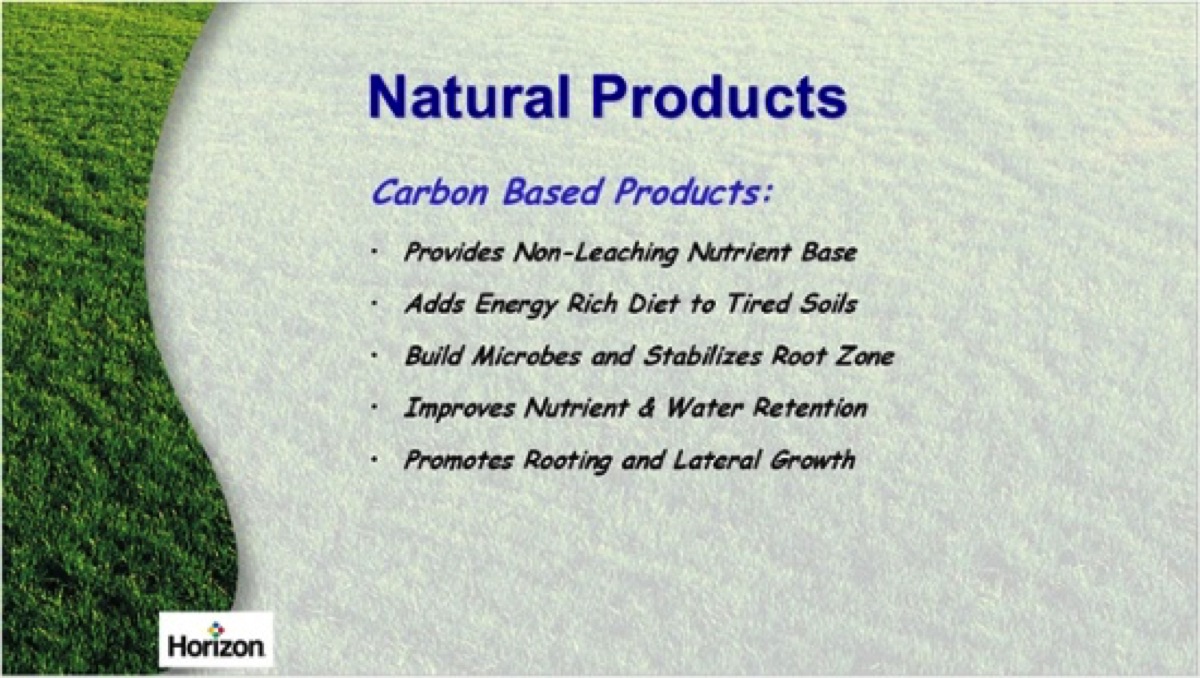 Carbon based products. As you get that carbon and that organic in the soil profile working, it doesn't want to leach out. It won't leach out because the soil is now working for you and it stays there.

Adds energy. Rich diet to tired soils. So as you're putting carbon based products in there, now those collapsed soils are getting a little reserve to come back. They're getting stronger.

Builds up that microbe. Stabilizes the root zone. We'll talk about why that happens here in a minute. It improves the nutrient and water retention in that soil and promotes rooting and lateral growth.