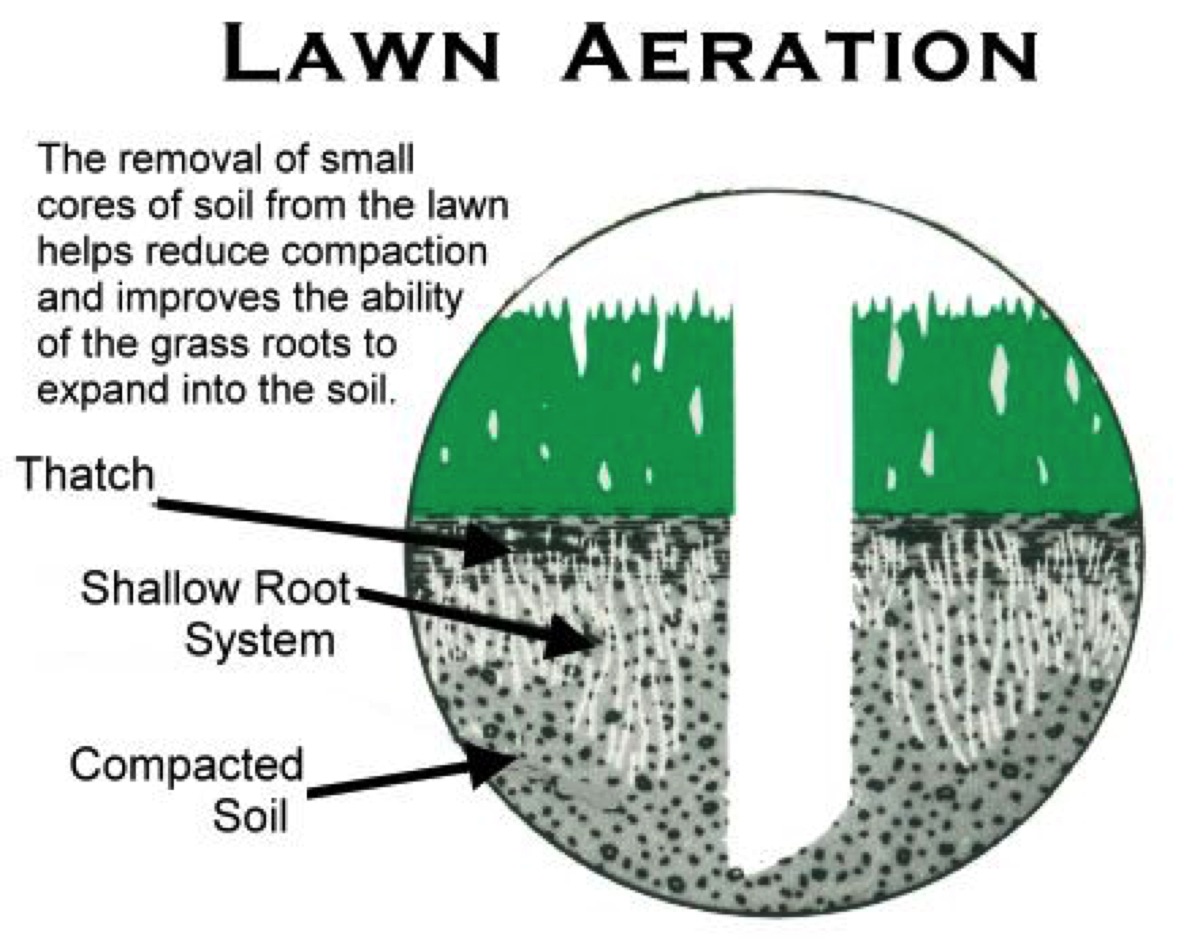 5 Reasons To Aerate Your Customer's Lawn This Fall

Fall is the best time to do any mechanical modification to your customer's lawn primarily because we have just left behind the heat of the summer. The lawn has already suffered whatever damages Mother Nature has thrown at it. And in the fall, the days are still long enough and the nights are warm enough to get the lawn back in shape.

During the summer, you could experience the following challenges at the properties you maintain:

Any one of these issues can have a dramatic effect on how the lawn survives over the coming seasons. So let's look at some of the reasons why aerating is beneficial to turf's long-term health:

The main reason you aerate is for regeneration of the root system. The roots are the delivery system that supplies the oxygen, water, and nutrients necessary to support the life of the turf. Roots need ample oxygen to survive and grow. Aeration allows you to open up channels and get oxygen directly to the root system. These channels also serve as a funnel for water to reach the roots and create an undisturbed area for the roots to grow.

Oxygen is also required by the microbes that live in the root zone. Microbes not only help deliver nutrients, but they eliminate waste that the turf secretes. Without them, you would not have a survivable landscape.

Another reason we aerate is that it provides us a more direct way to add nutrients that can positively change the soil chemistry. For example, if a soil sample from one of the properties you maintain shows that the soil is low in calcium, aeration can help you introduce the calcium directly into the soil. It's much more effective than applying it on top and washing it in with a lot of water.

Aeration is also a good way to remove excessive thatch. Thatch is often a direct result of excess watering and high amounts of water soluble nitrogen. If you have excessive thatch (1” or greater), more than one aerification a year might be required since you can only remove less than 3% of the thatch (depending on tine spacing).

When trying to overseed into an existing lawn, core aeration can help to create a good seed bed for new seed. It gives the seedling uncompromised room to exist and take root. It's much easier than trying to do so in an existing turf canopy.

Giving the Turf Time To Recover After Aeration

Keep in mind, that aeration is an intense cultural practice for turf and it will need time to heal before the next environmental challenge. It's important to have at least 6 weeks of good growing conditions to give the turf time to recover.

Warm season grasses like Bermuda grass, St. Augustine, and Zoysia start to harden off in the fall and go dormant during the winter. It's important to aerate these grasses in late summer/early fall so they have time to recover before going dormant. If it's too late in the fall, you're probably better off waiting until the following spring.

Cool season grasses like Kentucky Bluegrass, Perennial Ryegrass, Bent Grass, and Tall Fescue are actively growing in the fall, so it's a perfect time to aerate. The main caveat with cool season grasses is to carefully time any other programs like overseeding or applying pre-emergent. Pre-emergent applications should either be scheduled after aeration to prevent disrupting the barrier or aeration should take place long after the pre-emergent application and the major weed germination window.

As you've seen, there are many reasons to aerate lawns in the fall. The agronomic advantages of aerating greatly outnumber any disadvantages. If you have a customer that's particular about their lawn's appearance, assure them that the remnants of aeration are usually hidden away within a week because you have just created an environment for growth. In the medium to long-term, the turf will be healthier.

Many thanks to Nick diLorenzo, DBDS of our Southwest Division, and Christina Burton, Maintenance Channel Manager, for helping me put this article together. If you have any questions about aeration or any other issues with a lawn you're working on, you can either download our Landscape Maintenance Guide or contact your local Horizon store. We're here to help!